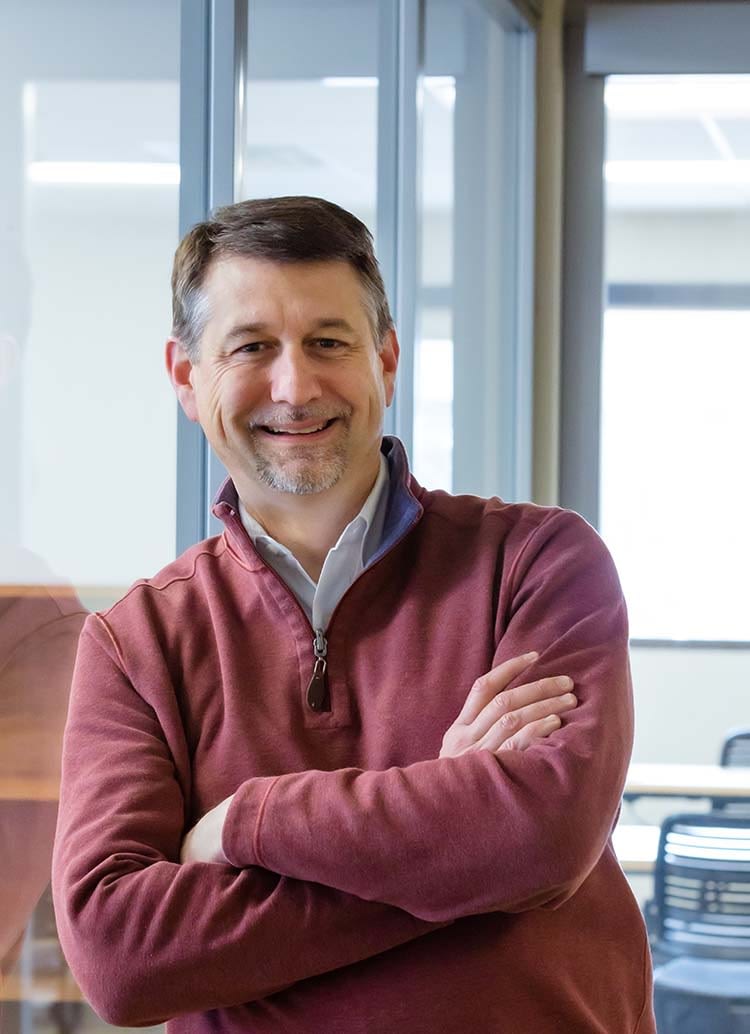 In his teenage years, Dr. Matt Lucas dreamed of being a devotional writer. He practiced often, trying to emulate the style of the “Our Daily Bread” devotions he read. “Sadly, they weren’t very good,” he laughs.

Despite the quality of those early attempts, Lucas, a Corban alum and former Provost and Executive Vice President of Corban University, was officially named President and CEO of Our Daily Bread Ministries on March 1, 2022. While he called the opportunity “unexpected” and “unlooked for,” he slowly began to see the signposts of God’s working in his life. “When they reached out to me, I was very surprised,” he says. “I wasn’t thinking about this type of ministry, but it reminded me of my desire as a young man to write devotionals.”

Prior to being named as Our Daily Bread’s new CEO, Lucas served most recently as Chancellor at Indiana Wesleyan University—National & Global, and as Provost and Executive Vice President at Corban University from 2008 to 2017. For some time, after nearly 20 years of working in higher education, Lucas had been considering a change, whether that looked like becoming an executive pastor or some other form of ministry. For a year, he prayed, talked with his family, and pursued the advice of mentors and advisors who affirmed his thinking.

When Our Daily Bread first asked if he would be interested in the position, Lucas saw the opportunity as a way of God reclarifying his steps, but he still did not think becoming the CEO of such an established organization would be his next opportunity. “Halfway through the process, I remember turning to my wife and saying, ‘If it’s not this, I know it is something like this,’” he says. “To think I could be doing this kind of ministry just blew me away. It still does. It was not on my radar. But I began to see why it could be.”

The opportunity began to grow in his mind as he started to see the unique intersection of background and passions it represented. “Before they called, I had been telling my wife, ‘Wouldn’t it be great if I could write devotions?’” he says. “We both came to the conclusion that we were looking for something ministry focused, that had a global perspective, and would also responsibly steward the skills and experiences that God had blessed me with already. I sensed that God didn’t give me those opportunities not to use them.” Those three things seemed challenging to weave into one calling.

It was during his time as Provost at Corban that Lucas first began to reignite his passion for devotional writing, producing a monthly message for students and staff.  “I felt passionate about the spiritual health of the community, and I had an audience, so I figured I would just start doing it,” he says. It was a practice that expanded during his time at Indiana Wesleyan, growing to a weekly communication. “When I look at my past professional experience, the thing that I’ve enjoyed most was discipleship with students, faculty, and staff.”

Despite his growing interest in the position, as Lucas progressed through the interview and hiring process, the reality that he was well-qualified for the role still had yet to set in. It wasn’t until he received the official call from Our Daily Bread, on a drive up to Grand Rapids for a visit to their headquarters, that the opportunity began to transform from an unexpected dream to something concrete. “When I hung up the phone, my wife turned to me immediately and said, ‘This is the result of our time at Corban,’” he recalls. She reminded him of the conversations that their professors used to have with them as undergraduate students at then Western Baptist College. “We had been given a great education around Bible, ministry, and theology,” Lucas says. “We knew that not everyone in the church would have that opportunity, and we were challenged with how we were going to use it for God’s Kingdom.”

Lucas considers the foundational knowledge that he gained at Corban to be one of the prime contributors to his career success. “It’s strange to be leading a Christian ministry started by a pastor with a seminary degree back in the 30s,” he says. “That someone like me, who has three degrees in English, is leading it is in a lot of ways a testament to Corban’s foundation.”

In his professional life, it has often been Lucas’ diverse educational background and skillset that has stood out to employers. “Wherever I’ve gone, people have often assumed that I was a Bible major, but that was part of my education,” he says. “This is what I learned whether it was in English class, science class, or through my Bible minor. That’s a phenomenal legacy as a University, and a real testament to the faculty and their commitment to biblical integration.”

His path has led him from those moments as a young undergrad, searching for purpose among his passions, through the world of higher education, back to a place that had claimed his heart before any of those opportunities existed—as a kid with pencil and paper, and words to share.

As Our Daily Bread Ministries’ new CEO, Lucas hopes to take the organization’s rich legacy of global discipleship and wealth of resources and find new ways to keep expanding their reach. “Our Daily Bread is a portal to so much good content,” he says. “What would it look like for it to be a platform for all types and levels of Bible engagement and ministry? How do we use our strong legacy brand among Christian circles to further the Kingdom?”

This is where another integral element of Lucas’ past comes into focus. Spending his childhood years in Taiwan, he has always been keenly aware of the importance of multinational and multicultural thinking. Whether it manifested in hours pouring over the old globe in their home or in an ever-present urge to be involved in global missions, Lucas’ heart has always steered toward God’s global Kingdom.

In the first six weeks of his new role, he will have the opportunity to travel to England, Singapore, Brazil, and Indonesia, collaborating with local teams, each governed by their own local boards, finding new ways to spread the gospel to all the places he dreamed of visiting as a child.

“I’m already seeing so many stories of people receiving Our Daily Bread literally at the ends of the earth and having their lives transformed by our devotionals and access to the Bible,” says Lucas. “With 35 locations around the world, Our Daily Bread is in a unique position to be a significant leader and contributor in the global conversation of Bible engagement.”

It’s a need that is only increasing. “At a time when Bible literacy is at an all-time low in the United States, we believe that the Word of God doesn’t return void,” Lucas says. “I do believe in the power of context and ministry built around the Bible, but that the Bible can also speak for itself. It is the Word of God. The more that we can help people access and engage with the Bible, the more that we can bring like-minded partners together to elevate the work that they’re doing so that the Holy Spirit can move, the more God can be glorified.”

Who could knit together a passion for devotional writing, a career in educational administration, and a zeal for global ministry? For Lucas, the answer is clear. “I would’ve never thought that those distinct things could come together,” he says. “But God is good. I never could’ve said how that would happen. I just couldn’t see it. But it’s clear to me now that it’s something God has been preparing me for long before I ever realized I was being prepared for it.”

Ever since the days a young teen put pencil to paper, writing in the style of the Our Daily Bread devotionals he so often read, whether the initial attempts were successful or not, God has been preparing a path that combines passion and purpose for Our Daily Bread’s new CEO. “The mission of Our Daily Bread is to make the lifechanging wisdom of the Bible understandable and accessible to all,” Lucas says. “If we can do that, and I can help by serving in my role, then I am making a difference in the world for Jesus Christ. And that’s how God is ultimately made known.”