EQUIPPED TO EMBRACE THE UNEXPECTED: DAVID AND HEATHER HOLCOMB

“I don’t think it’s a coincidence that as soon as I grew in patience and accepted what God was showing me, this door opened,” says David Holcomb. “I learned patience watching Heather.”

David and Heather Holcomb are both Corban alumni. Married with two children, both have recently stepped into leadership roles they did not plan for or envision on their horizons. Since graduating in 2012 and 2011, respectively, David and Heather have moved from self-described, “living on next-to-nothing with a new baby,” to unexpected ministries in new leadership positions. David transitioned from social studies teacher to the role of Instructional Mentor & AVID Coordinator at McNary High School, while Heather went from full-time mom to Development Director of Acres of Hope, a horse ranch that serves and offers mentorship to youth in need.

The opportunities were unanticipated, but their dedication to service and faithfulness to God’s calling on their lives gave them the courage to step forward. “It has taken a lot of risk on our end, but it has been so fulfilling because we were confident in what God was doing,” Heather says.

In a few short years, Heather has seen Acres of Hope grow from a start-up nonprofit to a ministry that hosts 178 mentorship sessions a month. This past year, six of their programmers gave their lives to Christ, including two baptisms, done in a horse trough, of course.

For David, his new role has given him an expanded platform for service. “It’s opened up doors to being a part of all 2,000 kids’ classrooms,” he says. “I’ve had the opportunity to meet with struggling kids and their families and speak the truth over them. That’s what I needed in high school. It’s what I needed at Corban, where I had incredible mentors. Seeing change happen at the family level is a door that God opened that I didn’t understand was even a possibility.”

For the Holcombs, their time at Corban was foundational to the work they are doing now. It was the bedrock experience that equipped them to step into God’s calling with courage and competence. “Corban has amazing faculty and phenomenal staff,” David says. “My professors, their service to Christ and their love for their students, how relational they were, made Corban’s faith integration come alive. The examples they set, we take with us every day as we serve in our careers.” 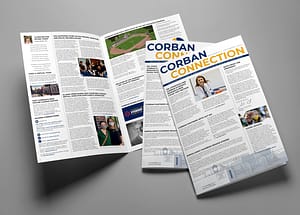