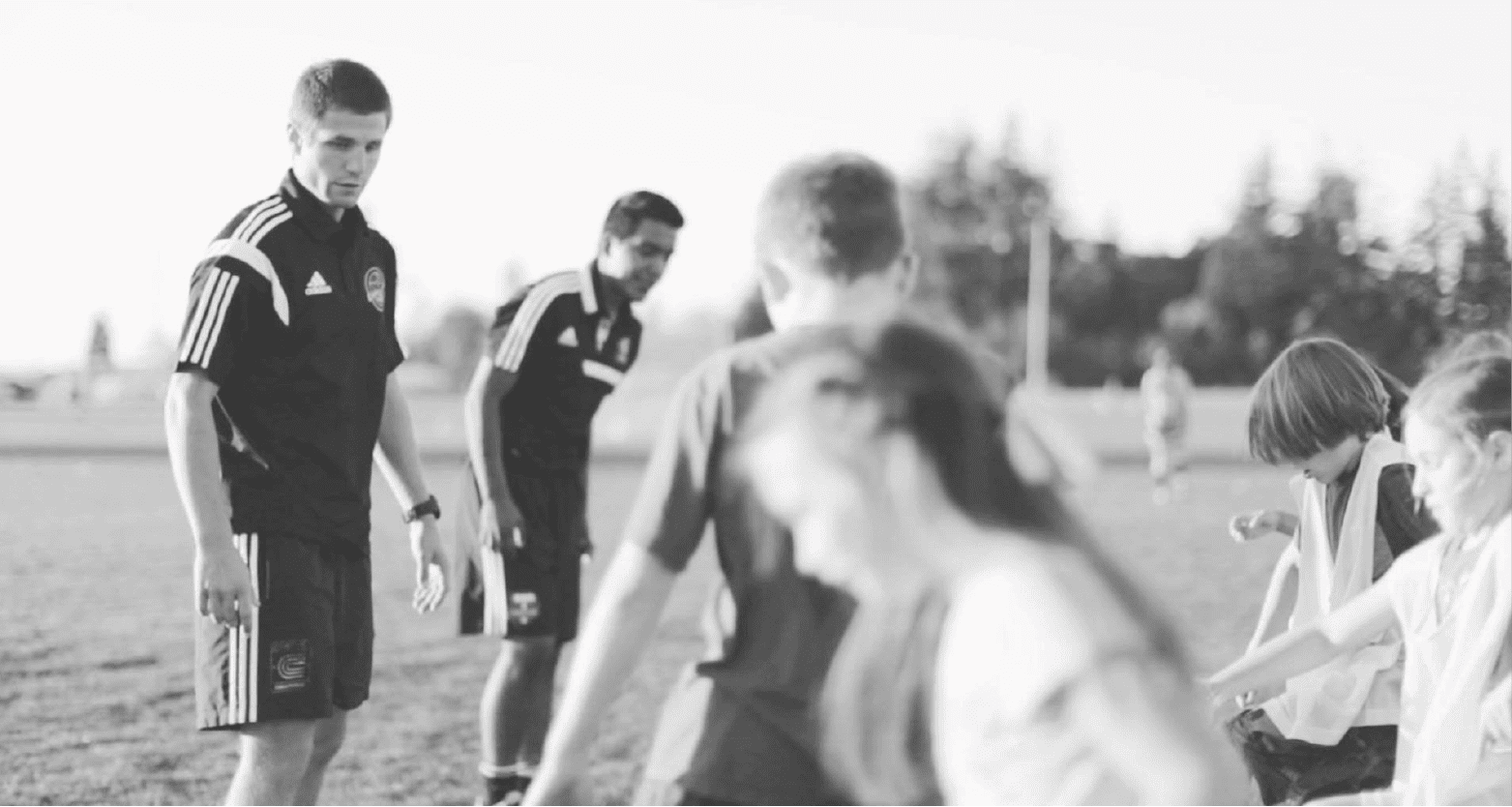 “One of my favorite quotes is that ‘the ball is the greatest invitation in the world,’” says Collin Box, a Corban alum (’10) and current Executive Director of Capital Futbol Club (CFC) in Salem. “You don’t have to speak the language or even say hello, but you can roll a soccer ball out on a field and you’re instantly able to make connections with people. I think the value of athletics is in the opportunities it presents to create community and connect that is pretty unique.”

Before Collin became Executive Director, he was an aspiring soccer player himself. As a freshman on Corban’s men’s soccer team, Collin continued to follow a passion that had been cultivated in him since childhood. In between practices, games, and studying, Box also helped coach several youth teams at CFC. It was his part in giving back to the community and the sport that had given him so much.

After a severe hip injury in his freshman year robbed him of the ability to continue pursuing his passion on the field, Box chose to turn even harder into volunteer coaching. He wanted to continue to extend the invitation, rolling the ball out for kids who needed an outlet, a space to grow, and the ability to learn valuable life lessons in a safe environment.

“I owe a lot in my personal development to athletics and Corban,” he says. “There aren’t many situations growing up where you get a chance to have real responsibility that means something. You learn how to work as a part of a team. You learn what it means to lose and to try and come back from those setbacks. You learn how to work on some of your weaknesses, the value of hard work, handling criticism, goal-setting and how to achieve those goals. All of those things are life skills that have a great impact on people’s futures.”

Collin continued to coach throughout college, eventually graduating with a degree in ministry from Corban in 2010. It was shortly after that Box saw a need within the organization he had been serving for so many years and felt called and encouraged to pursue it in spite of his age. He approached the Board of Directors of CFC, a 21-year-old recent college graduate with a vision for the club’s future. “They took a risk on me,” Box remembers. “I wanted to help make a difference in our community and make it more than just about soccer. I wanted to provide a quality service that was needed in our community for these kids.”

At the time, the club had roughly 13 teams and supported nearly 800 kids from ages 3 to 18. Now, under Box’s direction, the club has grown to over 2,500 kids and includes three semiprofessional affiliate teams. Box points toward his Corban education as a significant reason for his success at such a young age. “Corban is a respected organization in the community,” he says. “Coming from Corban means something. I didn’t know this as much at the time, but being an alumni of Corban has value. And I see that through the connections I’m able to make within the community.”

Those connections have led to increased opportunities for kids in the community, as the club now offers scholarship aid, expanded after-school soccer programs, and works with refugees, aiding their language learning through the global vernacular of soccer. “I pray for God’s Kingdom to come through the work that we’re doing and the connections that are made,” says Box. “Amazing things are happening all the time. Soccer just happens to be the platform.”

One of the most significant developments under Box’s leadership at CFC is the completion of their new complex of turf fields. “It’s been a gamechanger for us,” says Box. “From a financial perspective, it completely flipped our situation. Our numbers increased. We’ve been able to offer more programs and more comprehensive programs that have helped us serve kids to a greater degree.”

Currently, CFC is hosting Corban’s men’s and women’s soccer teams, as their field is not always playable due to inadequate conditions. Box remembers the struggle as a player himself. “Having a new complex has been a gamechanger for us, and I think the sooner that Corban can get this, it’s a win for everybody. It’s so needed in our community,” he says. “I think that there’s a lot of synergy with our program and what Corban’s doing. When our kids see Corban students who are coaching them, or they come and see the games, that really does inspire them to think about their future.”

While Box and CFC enjoy the benefits of their kids’ proximity to Corban players, he knows there are greater opportunities ahead for Corban. “Not only would it benefit to Corban students and future students [to have an outdoor athletic complex], but it would also be a huge community asset,” he says. “I learned so much about service in my time at Corban, and I think Corban wants to be a service to the Salem community. Having something like that in our city is very needed.”

While the onset of COVID has cast shadows of doubt over athletics as a whole, Box has only witnessed the galvanization of its importance in the community. “There’s a hunger for positive activities happening in our city,” he says. “I’m excited about the momentum we have even through COVID. There’s been loss, but there’s also been rebirth and the development of new partnerships.”

And Box hopes that a new partnership can emerge and grow in the future as Corban students continue to pour into the lives of the kids at Capitol Futbol Club, just as he did as a college student searching for new purpose years ago. Box’s prayer for the city of Salem, for his own club, and for Corban is that the ball, the greatest invitation in the world, will continue to be rolled out to kids who are looking for belonging, purpose, and hope for their future.

“It’s just a field, but what happens inside of the field?” Box says. “This field, or this track, is a place where so many life lessons are learned. From that angle, you’re really investing into the futures of all of these students who are coming through. You’re able to invest in the University and touch thousands and thousands of kids in this community and make a tremendous impact.”