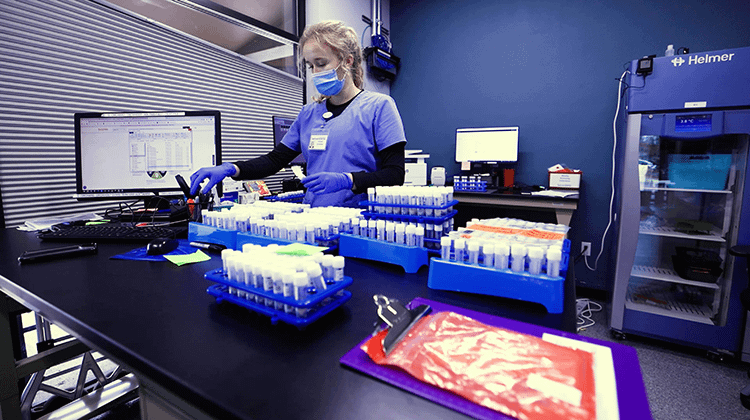 At the onset of the COVID-19 pandemic, few could have predicted its course. In Oregon, even fewer would’ve expected a small, liberal arts university, partnered with a local, more rurally-focused hospital, to be prime players in frontline research and testing.

Over the past two years, under the guidance of Associate Professor of Biology Dr. Sarah Comstock and medical professionals at Santiam Hospital, Corban University has done just that. Now, the University and hospital are ready to take another crucial step as the two have partnered to launched their new SCoPE Lab (Santiam Corban PCR Enterprise). A collaborative venture, the lab currently functions primarily as a diagnostic testing center for COVID-19, but is equipped for future molecular research that will benefit Corban students, the local community, and beyond.

The joint venture is a product of early collaboration that has expanded significantly since the first days of the pandemic. It has steadily grown from a resource-sharing partnership to help test vulnerable populations served by Santiam Hospital to running tests for the entire Cascade Collegiate Conference, becoming one of five K-12 diagnostic sites in the state, participating in real-time work to identify new variant strains of COVID-19 in the region, and performing independent molecular research.

Spearheading the University’s involvement is Dr. Comstock. Under her guidance, Corban has seen the partnership grow, expanding to the point where students have access to uncommon educational and career-shaping opportunities at the undergraduate level. “Our students help with all aspects of test development, and they also help to collect samples,” Comstock says. “It’s a great opportunity for them to intern in a hospital lab and get real-world experience in healthcare and research settings.”

For Corban student researcher Abbygail Furrow, opportunities to work in a real-world hospital setting and perform meaningful research have been critical in the pursuit of her dream of one day becoming a surgeon. “To be in a field where this is real, this is cutting edge, and this is actively being studied across the world has been incredible,” she says. “It’s been unbelievable to be around the conversation and the problem in a way that’s deeper than just reading about it.”

The SCoPE Lab was first housed within Santiam Hospital itself, but with demand for testing increasing, it became clear that they would need a longer-term solution. With major grant support from Oregon Health Authority and other organizations, the team was able to identify an independent lab space that they could customize to fit the growing needs of their community. Now, Corban students work alongside professionals like Comstock and the researchers at Santiam in the new lab space in Aumsville, putting their academic knowledge into real-world practice.

Since the beginning of the pandemic, Corban has stayed ahead of the curve in regard to research and testing. In November of 2020, Comstock pursued authorization to implement a testing method called “saliva direct,” first developed by Yale University. The first lab in the state, and one of the first in the country, to take on this quick, efficient, and less invasive method of PCR testing, Corban quickly became a key player in COVID research not only in the state of Oregon, but for the Northwest. They rapidly expanded the number of local individuals they could test, and the Cascade Collegiate Conference, which includes Corban and other schools throughout Oregon, Idaho, Washington, and Montana, soon reached out to Comstock and her team to take on the testing needs of their athletic teams.

“Our students were super instrumental in making that happen,” says Comstock. “They helped set up the test because we had about a thousand tests a week that we needed to turn out in around 24 hours.” Their efforts allowed the CCC to have athletic seasons that many believed would be shut down. Now, the SCoPE Lab, along with running tests for local populations and organizations like the CCC, also is the primary diagnostic lab for over half of the school districts in Oregon, including Salem-Keizer.

“Research has shown that screening in schools significantly reduces outbreaks.” Comstock says. As one of only five labs in Oregon doing K-12 testing, Corban’s SCoPE Lab is meeting vital needs, using their saliva-based tests to offer fast and efficient 24-hour turnarounds that take the pressure of booking tests off of parents, and provide administrators the necessary knowledge and data to make intelligent decisions for the safety of the students in their schools.

“We also did a research study this summer to identify the Delta variant in Oregon with our students and partners from OHSU,” Comstock says. “It was great research experience for my students to be able to take positive samples, run tests, and send them to OHSU to identify when certain variants first appeared in our region.” They were one of the first labs in the country to identify the variant, and students then had the opportunity to present their findings at the Murdock Undergraduate Research Conference in Vancouver.

As Corban plays a key role in the health and safety of its community, their reach is expanding beyond Oregon, and even outside of the borders of the United States as Comstock now consults with labs throughout the U.S. and Europe, training them in the implementation of “saliva direct” testing. “That’s been an amazing opportunity to expand the reach that Corban and Santiam Hospital has throughout the nation and even globally,” she says.

The impact the SCoPE Lab is having at home continues to grow. Since moving into the new space, the team has gone from processing 300 tests a day to 1,500, and Comstock envisions that number increasing significantly as they continue to dial in their productivity in the new lab. “The facility makes a really big difference,” she says. “We were limited in space at Santiam Hospital, and since we’ve come here, we’ve been able to design the lab perfectly for molecular testing. Very few labs at hospitals are actually able to do molecular testing and have the capacity that we have.” As a result, the partnership is saving time and money for Santiam Hospital and the population they serve, with tests that were once sent to large labs in Washington or Texas now being done at home with lower costs and quicker turnarounds.

While COVID testing and research has been the primary focus, the advent of the SCoPE Lab presents even more opportunities to current and future Corban students. “In the future, we plan to continue with COVID testing, but we also plan to develop a lot of different molecular tests, and our students are instrumental in that process,” Comstock says. “Already, they are helping me learn how to sequence samples using a sequencer to find DNA sequences in specific viruses or tissue samples.”

With the lab’s molecular testing capacity, Comstock sees an open door for future viral, molecular, and even cancer research for their team and her students. “Molecular testing itself is pretty expensive and very specialized, and it’s not common for this type of testing or collaboration to occur at a smaller liberal arts university like ours,” she says. The lab also received a donation of a molecular sequencer, a rare and expensive piece of equipment that will allow Comstock and Corban student researchers to continue identifying viral variants and conducting cancer research. “At Corban, our students are getting the personalized attention that comes from a smaller liberal arts environment along with the kind of big research opportunities typically seen in the major state universities.”

Comstock does not envision these hands-on, real-world opportunities ending any time soon for her students and Corban’s program. “Because of the openness of Santiam Hospital, the need, and their willingness to hire my students as interns, it’s really created a long-term collaboration that we can build on for the foreseeable future,” she says. “When we think about developing new programs, we will always come to Santiam Hospital first. It’s been a great opportunity for our students to get to do things at the hospital and in the lab that are not typical for any undergraduate, let alone an undergraduate from a small liberal arts university.”

For Corban students, the opportunity to make an immediate difference beyond the classroom and prepare themselves for careers in committed care for their communities has been an uncommon asset. “It’s been encouraging to work alongside professors and doctors, not just to be a passive listener in discussions, but to be able to contribute meaningfully,” says Furrow. “We’re learning to apply the content we’re learning in class, and not just by watching, but by understanding the purpose of what’s happening under the hood, around the hospital, in the lab. It’s been energizing.”