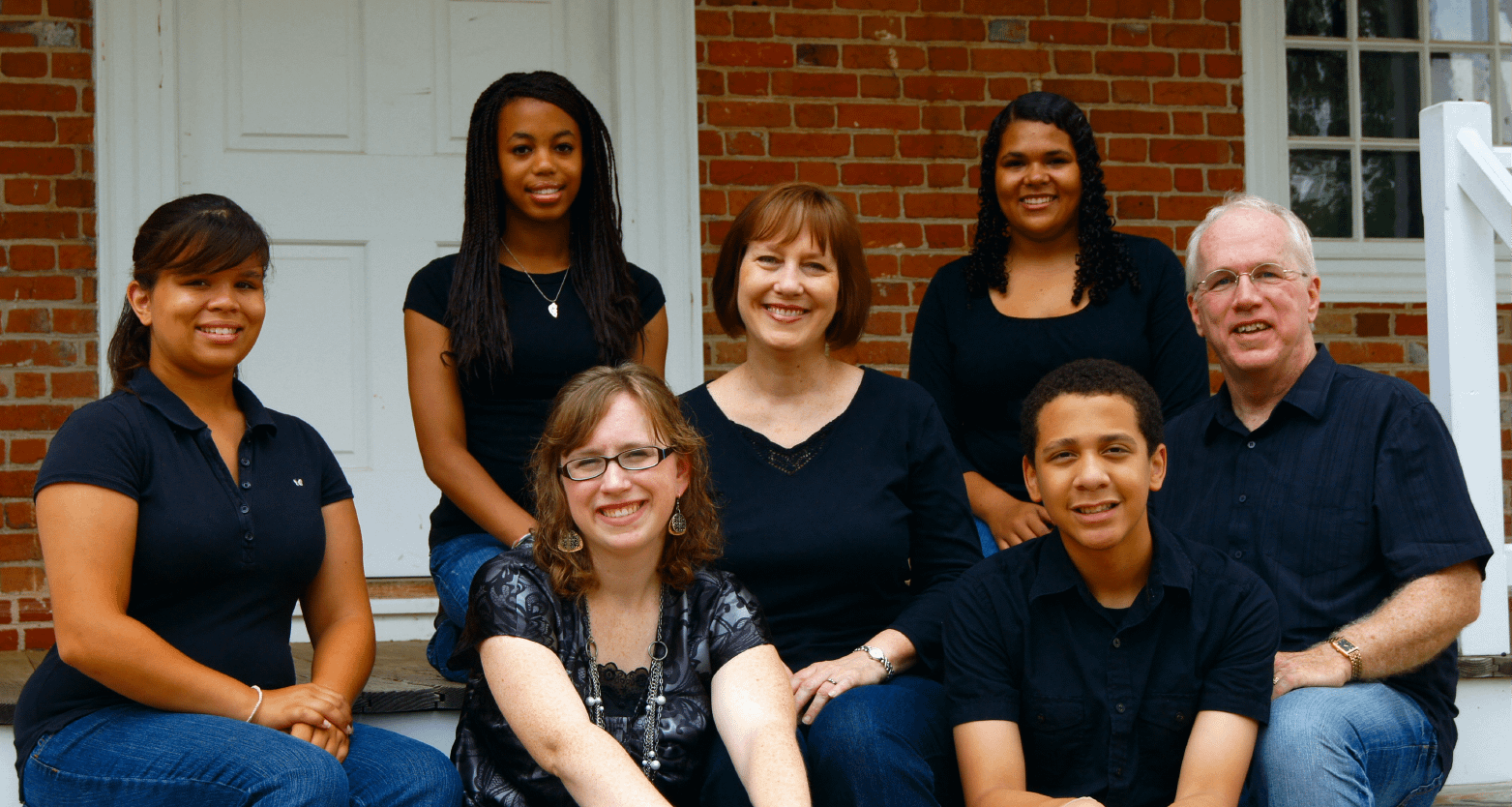 THE HUFFMAN'S STORY OF MULTIETHNIC ADOPTION AND RACIAL RECONCILIATION

“Every child, no matter how they come to you, is an absolute miracle,” Wanda Huffman says, seated next to her husband of over forty years. Wanda and Dave were first drawn to Corban University—then Western Baptist College—because they were looking for a theologically sound education grounded in the truths of Scripture.

“I wanted an accredited degree,” Dave says. “Then two years later, I met a really cute girl.” Even though they both attended Corban, Wanda and Dave did not actually meet while studying at Corban, but through a ministry outreach group at the church they both attended. A chance shuffling in their groups’ members brought them together in ministry, and eventually in matrimony, as the couple was married at Deepwood Estate a few years later.

Though their meeting may seem conventional in the small Christian college scene—boy meets girl through the fertile dating grounds of church ministry—the circumstances that crowded into their married life after were anything but. After their first daughter, Kerensa, was born, Wanda and Dave found themselves confronting unexpected fertility challenges. Adoption began to impress heavily on their minds, but Wanda felt a specific calling.

After another specialist visit, Dave and Wanda were left to weigh the cost and implications of the news given to them by the doctor. That’s when their phone rang. One of Dave’s longtime friends tugged his ear at the other end of the line. He wondered if the couple had considered adoption and informed them that he knew of a baby due to be born in a few months that needed home. “Dave said, ‘Don’t give the baby away!’” Wanda recalls.

As the call continued, God’s providence rang clear through the other end of the receiver. “Our friend said, ‘I need to give you more information, because you need to know this baby may not be white.’” They could feel God moving. “I told him that was even more of a confirmation and answer to prayer than he could know,” Dave says. When they hung up the phone, they began to pray.

Unconventionally, without the use of an adoption agency, their second child, Lydia, became a part of their growing family. Dave calls it an a la carte adoption. Wanda calls it a miracle. “We had already determined that these children weren’t going to necessarily look like us, but they were going to be ours,” she says. “And that was the beginning. Every one of our kids has a miraculous story like that.”

Their second miracle came far sooner than expected. Dave and Wanda had contacted an adoption agency prior to adopting Lydia, never expecting how quickly God would place her in their lives. A year later, with the agency they had contacted now far from their minds and baby Lydia now in their home, the agency reached out to them with another opportunity to adopt. “We weren’t even looking at that point because Lydia was just a year old,” Wanda says. In their minds, waiting for another year or two to apply again made the most sense. “If you get the opportunity to adopt, that’s amazing, but if you get the opportunity to adopt twice—oh wow. But we figured they were going to be about five years apart.”

“It was a five-week pregnancy,” Dave laughs. Lydia and their second adopted daughter, Laurel, are only 17 months apart. “It was such an unexpected gift,” Wanda says. In total, Dave and Wanda have four adopted children, Lydia, Laurel, Priscilla, and Gabriel. Each adoption brought similar challenges—complex paperwork, countless appointments, white glove home inspections—and yet each story was diverse, just as each child is immeasurably unique.

“We knew that once our family became multi-racial, that forever changed where we lived, the way our church looked, all of those pieces.” And the changes came quickly. Wanda vividly remembers standing in the middle of a Walmart aisle, surrounded by haircare products, slowly shrinking under the weight of such a seemingly small decision. An African American woman walked by and asked her if she needed help. The minutes stretched on as they talked about her struggles, and eventually the woman invited Wanda and her girls over to her house.  “At one point she said to me, ‘Don’t ask me about their hair. Ask me about how to raise them, because the culture is different.’” Wanda recalls. “She was so gracious. And that was from me just standing in a Walmart needing help. God has peppered our lives with some really wonderful people.”

Dave and Wanda now live in a highly diverse suburb of Washington, D.C., on the Mason-Dixon line, in the same town where John Wilkes-Booth fled after his assassination of Abraham Lincoln. The concept of “race,” even the feeling of the word itself, walks the streets each day. And Dave and Wanda have walked a long journey themselves. From something as seemingly simple as picking the right haircare product to handling historically charged issues which are far more complex and enduring, diversity has become an integral part of the Huffmans’ ministry.

Wanda now works as an administrator for a D.C.-area school district. Her middle school is 90% African American, and she is the only white administrator in her building. Dave is the Senior Pastor at South Potomac Church, and he and Wanda have been working to preach the Gospel and promote the unity they see painted colorfully across the pages of Scripture.

“Theologically, we are multiethnic, multicultural, and so that’s what we strive for in our communities.” Dave says. “Theologically, there’s one race, the human race, and in that, God created vast diversity. In heaven, in the future, in the Book of Revelation, all people, tribes, and languages will be present.”

Dave and Wanda have now used the unique circumstances God has blessed them with to help three churches change to become more multicultural and better reflect the communities they find themselves in. As Wanda puts it, “You can’t have Sunday morning be the most segregated hour of the week.”

For the Huffmans, multicultural diversity in community is about far more than demographic benchmarks and dialogue of inclusion. It has a Kingdom-driven purpose. “It’s not like when we get to heaven, we lose our nationality. We actually don’t,” Dave says. “And that was an eye-opener for me. The sooner you get into that game, the sooner you are on the winning side.”

In the unrest swept up in the wake of George Floyd’s death, the Huffmans’ ministry has been pressed to the forefront. “The last few months have probably been some of the most stressful in our lives because of the foolish, sinful acts of a few,” Dave says. “And unfortunately, it puts a strain on the Church as well.” As Senior Pastor, Dave has struggled in a climate that often asks him to pick a side. His church is comprised of people of all colors and contexts—its body contains police officers, retired FBI, government workers, and social activists. He defaults to the baseline of his solid theology, which he began to foster all those years ago as a student at Corban.

“I hear a lot of convincing voices and stories. With everything you’re doing, it can sound good, but you have to make sure you are going back to your biblical foundation,” he says. “In Church history you can see so many examples of people taking the Bible and using it to prove their biases. So, when I say make sure you’re going back to theology, make sure your theology is straight so that you’re not perverting and twisting the Bible to prove your point.”

Even in their expertise, both Dave and Wanda are quick to admit their own limitations. “We are no authorities. We continue to learn and grow,” Wanda says. “By the time we think we have something figured out, there is a new angle to consider. So, it is a work in progress. The social unrest in the country has taken all of us to new levels of considering how we are to remain true to our theology but also to be gracious, understanding, and keep listening.”

When confronting the issues of racism and prejudice Dave sees levied against the people of his country, his congregation, and his own family, he provides a simple explanation. “It’s sin,” he says, “the defensive selfishness of people.” From his years of experience, being shaped and sharpened by God and the friendship of his fellow believers, Dave encourages others to simply sit down regularly, consistently, and often uncomfortably, with someone who is different than them. “The principle is the principle of intentionality,” he says. “If you just sit with no other motive than to know someone as a brother or sister in the Lord, you will learn. It will humble you if you become a good listener.” It is a habit Dave still practices every week. “Even though I’ve been at this a long time, I still find myself becoming defensive,” he says. “But it’s the implementation of sound theology to humble yourself.”

As their journey as parents of a multiethnic family begins to shift and as the kids begin to grow, take on their own challenges, sort through their own experiences with the rapid collision of culture and theology, Dave and Wanda rest in one thought—a thought remembered in each of their children’s faces. “God is so much bigger than us,” Wanda says, “even in the way He put our family together. We prayed about it, and there were just these miracles that I never would’ve seen. But we continue to see miracles in the way He works in people’s lives and brings them along, brings us along, and brings us together.”