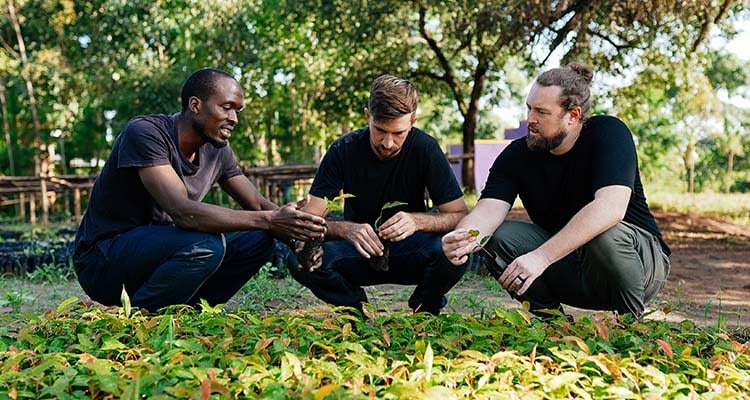 “Uganda used to be essentially one big forest,” says Corban alum and CEO of Kijani Forestry, Quinn Neely (‘08). Coined the “Pearl of Africa” for its verdant beauty, one hundred years ago, Uganda was comprised of around 85% forest. Today, that figure sits at just 7%.

This was the climate that Neely and his wife, Brittany, stepped into over eight years ago, when they were commissioned by their church as a newly married couple to serve alongside Restore International. “We came for six months and have been here eight years,” Neely says.

Six months was enough for them to see an incredible need for solutions that could combat poverty in their new home country. “We looked around at the issues we had been seeing and one that kept coming up was massive unemployment,” says Neely. “We tried a lot of different businesses. Some have worked very well and others haven’t.” From bike carts and restaurants to eyeglasses made out of recycled cow horn, Quinn and Brittney continued to try to find ways to meet the needs they saw in their new community of Gulu, Uganda.

To help finance their stay, and some of their business ventures, Neely began doing photo and video work for international governments and many large NGOs in the area. “Because of that, I spent a lot of time out in the villages, and I would see the massive deforestation that was happening,” he says.

At the heart of Uganda’s deforestation problem sits the $5 billion charcoal industry. “They call it black gold because it’s so lucrative,” Neely says. Demand for charcoal has nearly tripled within the eight years Quinn and Brittney have lived in Gulu as the urban population rates in Uganda explode. Uganda is the number one country in the world for urbanization rates and routinely sits in the top five for yearly population growth.

“With these massive amounts of people transitioning into these big cities, they are all relying on charcoal,” Neely says. “You now have charcoal in the cities and firewood in the villages. Both mean cutting down trees.” The economic effects have been massive, with growing scarcity causing prices to triple, becoming largely unaffordable for many residents and harder to obtain. The environmental effects have been equally devastating.

This was the climate that precipitated Neely’s desire to co-found Kijani Forestry. “Kijani just means ‘green’ in Swahili,” he says. “We are really bad at naming things.” While the name may not seem inventive to Neely, it is an apt descriptor. This year, the young organization planted over a million trees, with plans to plant between 6 and 10 million next year, and over 40 million the following year. Already, they have secured funding from several large international organizations, tax breaks, were selected as a charter member of the World Economic Forum’s “Trillion Tree Cohort,” and have become a partnership destination for many major research universities.

But this is not how Kijani began. Like the trees they plant, it did not simply grow overnight, but took time and careful cultivation. Neely and two of his friends, Paul Mukiibi and Beau Milliken, with a cumulative total of zero years of agricultural experience, decided to start growing. “We wanted to find a way to bring money into the communities and create as many jobs as we could, all while figuring out a way to produce charcoal more sustainably,” says Neely. “There’s a lot of talk around tree planting and not a lot of doing. We were kind of blind at the beginning and just decided to grow a lot of trees and see if that worked. It didn’t.”

The trio bought land, researched the fastest growing trees, got to work planting 40,000 seedlings in pots, and waited to see the fruits of their labors. A few weeks later, only 200 seeds had germinated. “We started to wonder if this might not be the best business plan, but we still felt like God was guiding us through this and that it was what we needed to be doing.”

God guided them to Dr. John Joseph Otim. The former senior agricultural advisor to the President of Uganda, a man who had met with the Pope in Vatican City and brought new species of plants to Australia with Prince Phillip, lived as a tenant in the community center Neely’s wife, Brittney, had founded in Gulu.

Dr. Otim, who Neely began to lovingly refer to as “Prof,” told them they needed to scratch the seeds to mimic an animal’s digestive process, breaking down the outer shell. “We did everything he said and then we got around 98% germination,” Neely recalls.

Kijani’s first failed crop, a gnarled, dark-colored collection of trunks littered with unwieldy spikes, still stands at a corner of their farm—a reminder of growth through adversity. “People still don’t mention the name of that type of tree in front of me anymore,” Neely laughs. “Every time I hear it I think, ‘Why did we plant those trees?’ But that ended up being a turning point for us. People were seeing that we were actually trying to do stuff. Even though it was wrong, with Prof’s guidance and wisdom, eventually we began to succeed.”

Professor Otim, who passed away early in 2021, left a wholly positive and permanent mark on both Neely and Kijani’s growth. “He was maybe the greatest human being I have ever met in my life,” says Neely. “That relationship shaped our development and who we are.”

Now Kijani owns over 400 acres of property, planted with new species of fast-growing trees, and their high-efficiency charcoal production method has yielded incredible results. “With traditional charcoal production, you put 100 kilograms in and get 6 kilograms out, but with our kilns, we’ve seen up to a 42% yield,” Neely says. “Our method is generating at least 50% more charcoal through our kilns, and all the trees that we plant, when you cut them down, they grow back even faster. In the same time span, you can get two to three times the biomass. This can be sustainable. You can plant trees and harvest them indefinitely, and you’re getting a lot more charcoal out of the same product.”

And with Prof’s desire to involve the surrounding community still in their minds and hearts, Kijani now has grown to over 125 employees and partners with local farmers in nine different districts, representing 1,500 separate households, with that number expected to grow to 7,000 by the end of the year.

“The reason we are able to plant these trees fairly inexpensively is that we are working with local farmers,” says Neely. “We provide the inputs—the kilns, the seeds, and the pots—we show them how to build nurseries and guide them through the whole process.”

Impoverished local farmers are the ones most affected by the instability of the charcoal industry and the massive deforestation that is annihilating Uganda’s once lush forests. Over the last five years, Neely has observed significant changes in weather patterns that have a dramatic impact on farming. Where once the rains came consistently in April, they are now sporadic.

“The people that are getting hurt by this the most are the people that are least equipped to deal with it,” Neely says. “These are subsistence farmers. They make 165 dollars a year for a household of six. When weather patterns change, they are the first affected.”

Since Kijani’s outgrower model began in 2020, they have helped local farmers plant over 1.2 million trees. “We sign a contract with them that we will buy their charcoal, and we bring in our kilns for them to use, so they are making 50% more charcoal, more output to sell to us, and we buy it at fair-market rate,” Neely says. “If they plant one acre, they can make around $10,000 over a ten-year period. It’s not just economic improvement for them. It’s like moving ten steps up the ladder.”

And the process is sustainable, providing an incredible increase to families while helping to mitigate environmental damage caused by deforestation. “At a large enough scale, getting to at least 100,000 farmers, hopefully in the next 5-10 years, that could actually have an impact on lowering the price of charcoal, but more importantly, that could have an impact on stopping the cutting of indigenous forests,” Neely says. “If you plant densely enough, even if we are harvesting on a three-year rotation, trees actually do bring rain, so we can help stabilize the rain patterns. And it would just be really cool to someday say that we actually ‘make it rain.’”

Neely’s concern for the stability of Uganda’s forests and weather patterns is driven by his concern for the people he interacts with every day. “As we shape our opinions on the environment and how we interact with the environment, we should be thinking not just about ourselves but about the people who are least equipped to deal with it,” he says. “We are with them every week, working together. We’re learning a lot from them, and they’re learning from us. And if the trees do well, they benefit, we benefit, and the environment benefits.”

Kijani’s model stretches even further, reaching to the hearts of the individuals and communities that first inspired Quinn, Brittany, and their partners at Kijani to first engage with the problems around them. “Working with these groups, we have access to thousands of people, and I think in a few years it will be hundreds of thousands,” Neely says. “We’ve started to integrate our partner ‘house-to-house’ program, which is helping to give the gift of a relationship with God back to the people.”

Many of the lessons and methods they incorporate were lessons learned during his time at Corban. “Having my Corban friends and these professors that I really love around me gave me a crucial foundation for my faith, which I have used daily, and it’s a huge part of what we do here.” Currently in Uganda, Christianity often suffers from a hierarchical structure which sees the pastor as the sole authority and receiver of God’s guidance. “We are integrating this model into our training, because we spend a lot of time with these people potting bags and scratching seedlings, so it gives us a platform.”

At every turn, with the memory and wisdom of Prof in their hearts, and God’s guidance directing their steps, Kijani continues to bring vitality back to the Pearl of Africa and its people, restoring its luster and beauty one tree at a time. “Uganda is full of incredible people who have so much potential and capacity,” Neely says. “That’s what I care most deeply about. If we are able to provide economic empowerment, maybe it won’t be the farmers we are working with now, but maybe their kids will be able to enjoy permanent, long-term effects on their communities, country, and the world.”