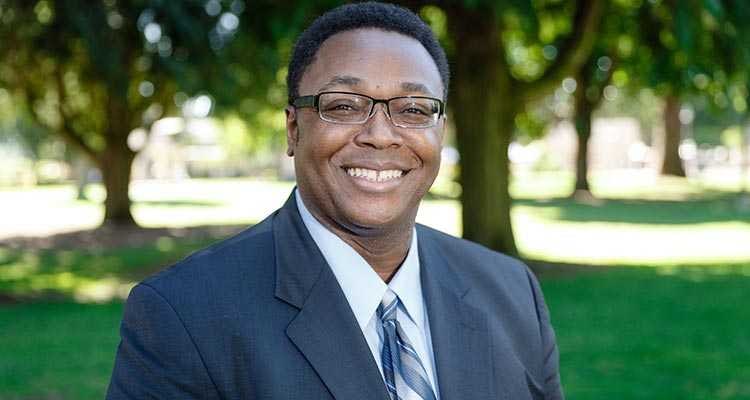 “It’s not always comfortable, what I do,” says Dr. Ulf Spears (’89), a Corban alum and winner of this year’s Distinguished Alumni Award. “I think I’m a nice guy, but I don’t stray away from hard topics.”

Dr. Spears admittedly has his foot in many camps—minister, entrepreneur, professor—but a critical intersection of Spears’ work life and ministry has been in the world of executive coaching and diversity training, where he provides guidance and expertise to business executives and organizations. “I’ve seen people come to Christ through coaching in the marketplace,” he says. “People don’t think of coaching as healing. They think of counseling as healing. But sometimes when people use the mirror of coaching, they get to see themselves and deal with their issues, and that can be freeing.”

As a black man in a predominantly white male sphere, whether it be in ministry or business, Spears has found that his experience and insight in diversity training, and the equipping of black and brown voices in both spaces, has become increasingly sought after. “It’s a very vulnerable process,” he admits.  “We have to be honest about how our culture has affected our view of Christianity. Whether it’s black culture, or white culture, or another.”

For Spears, these questions of culture, ethnicity, and their potential influence on not only an understanding of each other, but of the gospel, first began years ago as a transfer student at Corban University (then Western Baptist College).

“As a student, I knew the feeling of being a person of color in the midst of a group of mostly white students,” he says. A star basketball player who transferred from the University of Idaho after a series of injuries and personal tragedy left him lost and searching, Spears encountered a different element at Corban. “I was able to form relationships with people of other ethnicities,” he says. “The respect that I had for them and the respect they had for me, and having that common thread of Christ in the middle of it—that whole environment helped to facilitate what I’m doing today.”

At Corban, Spears began to form friendships with individuals who did not share his ethnic background but who shared his faith. They began joining together in prayer that Corban’s campus would continue to become more multicultural—a reflection of the global Church. “It was my time at Corban that birthed that sense of caring for other people that don’t look like me,” says Spears. “A huge part of my calling now is to the multicultural and multiethnic church because of my experience.”

One of the students Spears connected with was current Corban president, Dr. Sheldon Nord. “I remember when Ulf showed up at Corban. He brought a level of maturity and confidence that was contagious,” Nord says. “He took his faith in Jesus Christ seriously. We are all so proud of him and how he has become a church and community leader in Portland.”

Today, Spears has found himself reengaged with old friends like President Nord and the place that first began to cultivate in him the desire for multicultural ministry. In recent years, Corban University has welcomed Dr. Spears back to campus as a chapel speaker and diversity coach, and relied heavily on his expertise in striving to realize a vision that he and his fellow students had so many years ago. “This wasn’t just a partnership for me,” he says. “It was personal because I love and care for Corban so much.”

With the help of Spears and the commitment of President Nord and the University’s leadership, dialogue centered on diversity, representation, and inclusion has moved forward, leading to new initiatives and opportunities on campus. “Some of the exciting results have been that leaders of student government are people of color,” Spears says. “You see more professors of color teaching at the University, and programs like Act Six came as a result of some of these behind the scenes discussions and the initiative and commitment of Corban’s leadership.”

At the heart of his discussions, Spears points to the same unifying focus that, years ago, transformed the way he saw people who looked differently than he did. “When you put the gospel at the center, it’s a whole different approach,” he says. “It’s not diversity for diversity’s sake. It becomes about diversity in the Kingdom and the church. We are free to ask, ‘How do we have a dialogue about race in the context of God’s Kingdom and the multiethnic church?’”

Guided by this gospel-driven framework, Spears is able to engage with theories and systems that may seem outwardly threatening, dialoging about the important and meaningful roots beneath each issue. “Let’s check all of these cultural issues with Scripture,” he says. “You can look at all of it without adopting it. But we have to know what’s being discussed.  We have to engage with it, know what it does, how it affects us, what part we play.”

While the conversations aren’t always easy or even comfortable, whether in ministry, education, or the business world, Spears is excited that they are happening, and has also appreciated Corban’s measured approach in a climate that he sees as often prone to snap reactions. “I think it has been tempting for Christian universities to dive straight into the cultural conversation and be drawn out of our true calling,” he says. “I was proud of Corban for doing their research and creating a solid foundational understanding through dialogue.”

While Scripture is the framework for Spears’ understanding of many cultural issues, he also sees its truth, when shared in love, as the solution. “I never try to use the Scriptures as a source of personal power or intellectual authority, but as a means to facilitate what God has for someone’s life,” he says. “Those pages are the place where He changes you, and frees you, and prepares you. I had to change my stance in how I approached people with the Scriptures. I don’t want to be presenting the gospel from a position of false authority. I want to do it from a place of servanthood and empowerment.”

For Spears, the opportunity to return to Corban, the place that helped shape his path to multicultural ministry, feels like coming home. “It feels satisfying,” he says. “It feels like I’m able to come back and contribute. It feels like mentoring a younger generation, helping to give them a voice, and working alongside of my brothers and sisters in leadership at Corban by helping where I can and bringing another perspective. But it’s not about me. It’s about discovering what part Corban is supposed to play in respect to diversity and equipping and preparing young people.”

While Spears embraces the honor of engaging in the “tough and uncomfortable” conversations of today, he considers his newfound role in the Corban community as having little to do with him and everything to do with God’s gospel-plan for the University. But the honor of being recognized as Corban University’s Distinguished Alumni hits a personal note. “It’s everything,” he says. “It’s a surprise, an honor, but it says to me that somebody saw that I really cared about Corban. For me, it’s all about Corban becoming what God has called them to fully become.”